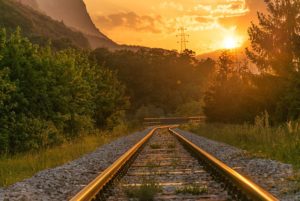 “We can’t be afraid of change. You may feel very secure in the pond that you are in, but if you never venture out of it, you will never know that there is such a thing as an ocean, a sea. Holding onto something that is good for you now, may be the very reason why you don’t have something better.” – C. Joybell C.

The subject of change has been on my mind a lot lately, mainly due to the fact that we’re in the process of selling our home and leaving the town we’ve loved for the last 20+ years for a place out in the country. We wouldn’t be too far away, just far enough that I wouldn’t be able to meet nearby friends at the local Mom and Pop restaurant for grits at 7:45 am. Okay, maybe it is too far.

A lot of people ask how we can know when God is up to something in our lives. For me, one indicator is when God takes me out of my comfort zone and I don’t even realize it until I look back on the situation. You see, I’ve never considered leaving this town I love. It’s a place where eternal friendships were forged. It’s where we raised our boys. It’s where I know people and they know me.

Is there any greater gift than to know…and be known?

When I consider moving to a place where familiar faces and places won’t surround me on a daily basis, there is an inkling of doubt, especially for this introverted soul of mine. And then God dots reminders of bigger pictures and plans at every turn, and doubt is swallowed whole because I know⎯and am known⎯by a God who is much more concerned about how I live rather than where I live. To step out into unfamiliar places is an act of faith, especially for those of us who aren’t the most adventurous of the bunch, preferring to settle in with the known rather than wrestle with the unknown.

So, are you ready to venture out of the known pond into the unknown oceans that await, confident that with the sovereign One by our side nothing in life is really unknown? Maybe for you, it’s not about changing a location. Maybe you’re venturing out into a new ministry? Entering a new role in life? Switching careers? The unknown will be different for us all but one question remains the same:

Will we step out in faith? I’d love to hear from you! What is one recent change that has been a good thing in your life? Or is there a way I can pray for you as consider venturing out from your own little known pond into the unknown?