One year later Corey and I closed on our tree house. (I like to name my houses.)

These two things don’t seem connected, but they bookend a chapter in the same story of God’s perfect timing.

Building/Moving/Selling/Moving is woven into the fabric of our family life.

Many of our decisions are weighed on the moving scale. When we build, I choose finishes and fixtures more for resale than for my preference. We base furniture purchases on three things: style, comfort and weight. If it’s too heavy, it’s not worth moving no matter how beautiful it is. And that 2011 family vacation to Colorado? Postponed for a year because it collided with a closing date…

The Harms family moving plan going into 2016 was to list our pi house (314 Centennial) in June. Then I got cancer and all plans for every part of life were put on hold while Corey and I brushed up on our knowledge of useless facts by playing Trivia Crack in Medical Clinic waiting rooms.

By June I was feeling pretty good. The cancer was gone. I didn’t need chemo. And I was in between reconstruction surgeries.

And I just wanted to be normal again.

Normal to me included listing our house. So that’s what we did.

When we were preparing to put our house on the market, we decided that we were ready to get off this moving rollercoaster. We wanted to find a place or build a place that would be permanent (well maybe not permanent, but closer to permanent than we are accustomed to.)

So Corey was like, “What do you think about buying a duplex on main street and living in it for a couple years while we wait for something we like to present itself?”

I am not opposed to adventurous housing scenarios, but within two seconds of walking in the door of the duplex with our real estate agent, my response (internally) was a resounding “No Way. Uh-uh. Not Ever. My husband has lost his mind.”

When I got home, my prayers went something like this. “Please Lord, don’t make me move into the house with overflowing poop toilets and grease dripping down the walls.” 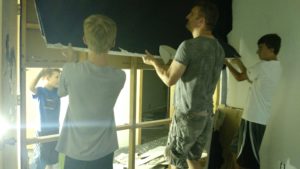 But God has a sense of humor.

He moved me into the place with the overflowing poop toilets and the grease dripping down the walls. Thankfully, the poop and 95% of the grease was gone when we moved in. I eventually captured my hubby’s vision (I usually do. Sometimes it just takes me a while.) And together we spent a month gutting and remodeling the place before moving in.

The original plan was to live in our newly remodeled duplex for one to two years. For a variety of reasons, we decided not to build this time around, so Zillow became my friend. In the mornings I made my coffee, did my devotions and checked my Zillow for new listings. (You see, I got on board with moving into the duplex, but I just wasn’t convinced of the two year plan.)

One day this fall, Zillow was good to me.

Listed was an in town acreage with a house hidden back in the trees, smack in the middle of the neighborhood 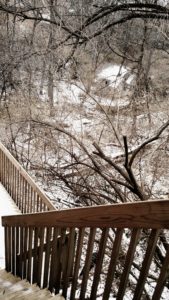 most of the boys’s friends live in. (Did I mention it comes with a tiny cabin by a ravine?) Be still my heart.

We looked at the house that day and made an offer (that was accepted) that night. Corey really liked the place. I really LOVED it.  And the boys immediately started making plans for ziplines and trails through the woods.

But some issues that turned up on inspection made it very clear to both of us that we couldn’t go through with the purchase.

That was hard. I so very much wanted that place, but I knew that God was telling me no.

Fast forward two months. The price has gone down and some of our concerns have been resolved. We began negotiating with the seller again and came to a price we could agree upon.

It turns out God wasn’t saying no. He was saying wait. The waiting part was key, because without it we would have missed the sweetest part of the story.

Because we were totally flexible on the moving date, we left it up to our real estate agent and the sellers. The date picked? January 20.

When we told the boys about the closing date at the supper table, Owen said, “God knew he was going to do that, didn’t he?”

Yes buddy. I have no doubt.

One year to the day after receiving the hardest news of our lives, Corey, Carter, Owen, Lewis and I are walking through the doors of our tree house.

God, in his lavish love was like, “See guys? I took care of you through the hard stuff and now I am giving you this gift.”

That’s who God is. He is healer. He is sustainer. He is a father who loves to give his children good gifts. And His timing is perfect.