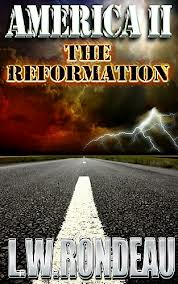 Book reviewer, T. Neal Tarver, a native Texan living in Wisconsin, has served churches in Texas and Wisconsin. He, his wife Ellen, and son Daniel lived and worked for three years as missionaries in the Russian Far East. Tom speaks enough Russian to both converse and confuse.
In 2011, Tom was selected as a semi-finalist in the American Christian Fiction Writers’ Genesis contest. He’s also been a two-time winner of MBT’s “Make Every Word Count Flash Fiction” contest. His debut novel, Dark Eyes, Deep Eyes, is available throughWestBow Press, Amazon, BARNES & NOBLE, and other retail outlets.
He currently writes from his home in Richland Center, Wisconsin, or from wherever his travels take him. He posts articles weekly at A Curious Band of Others.
Tom has spoken in churches across America, and in Europe, Asia, and the Middle East.

Halfway through “America II: The Reformation,” I kept asking, “So what’s going to happen?”

And that’s a great question for a writer to bring to life in the mind of a reader. L. W. Rondeau did this with masterful stroke after masterful stroke, and each chapter hooked me further and further into wanting to know the answer.

Rondeau created characters worth knowing and brought me the reader right inside their heads. Hearing the thoughts of Edwin Rowlands, the story’s resident bad guy, I understood how he manipulated people and situations to satisfy his lust for power and women.

Ahmed Farid, Rowlands second in command, is a delightful character who remains faithful to a repressive government. He’s a pagan at heart but constantly wrestles with faith questions. He is both wise and cunning.

Rondeau creates a future world and, through the power of story, addresses some controversial issues our world faces now and will face in the future. She does so from a clear Christian perspective but not in a preachy way. She crafts a story worth reading.

I look forward to the next installation of America II