I had a dinner guest the other day. She was loud, demanding, and cranky when she didn’t get her way. Anything she saw in the room “belonged” to her, and she picked it up then tossed it around. Woe to anyone who tried to take it away! She let them know in no uncertain terms they were overstepping their boundaries. 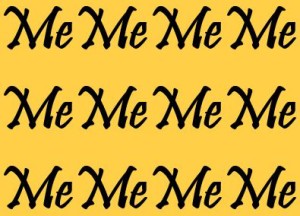 When she was hungry, she yelled that she was ready to Eat. Right. Now. And she refused to wait. Oh, by the way, she was a very picky eater and turned up her nose at most of the food offered to her. Then, as the evening wore on, she got tired, which made her even louder and more obnoxious. It was a strenuous evening, to say the least.

She was just doing what came naturally to her – being selfish, demanding her way, and acting as though the world belonged to her. If she had not been my two-year-old granddaughter, I would NOT have put up with that. But that’s the way she was born, and she’s in the process of learning to act less selfishly, I hope!

Unfortunately, many never outgrow that behavior. They insist on things their way. Burger King built an empire on that selfishness. “Have it your way” enticed a lot of people to order those burgers exactly the way they wanted them.

A friend was waiting with her young daughter at a burger joint behind a customer who complained loud and long that his sandwich was not to his satisfaction. After several awkward minutes of yelling, the manager trying to assuage him, and many offers to placate him, the man turned to walk away. The young girl looked at him and repeated what her mother had said to her many times: “You get what you get and you don’t throw a fit!” (Other folks in line cheered!)

There was a time, not too long ago, when we would go to a restaurant and order a burger and fries. The plate would be delivered with a bun, meat, tomato, lettuce, and a pickle, along with bottles of ketchup, mustard, and mayonnaise, so we could doctor it any way we wanted. Then we got lazy and decided to tell someone else how to build our burgers instead. And we insist they get it right or we make them do it again.

Selfishness has crept into our relationships. We found the perfect guy (or gal) and did everything we could to make them happy. Eventually, we wanted to spend the rest of our lives together. Then, when we became comfortable, we quit trying to please the other person and decided it was “me” time. “I want this for me, and I don’t care how this will affect you or our budget.  “I’ve spent all this time, money, and energy making you happy, so now it’s my turn.” “You get to make ME happy now!”

What if we changed our attitudes? What would happen if, instead of going into a relationship wanting to please the other person just until they committed to us, we truly wanted them to be happy for the rest of their lives? And we worked toward that?

For a long time, we were told that marriage was a 50/50 arrangement, each person contributing 50% of what it takes to make it work. In theory, that may sound good. But when it comes to figuring who does what, couples have different ideas. And when you start keeping score, the relationship becomes a partnership and loving emotions are no longer present, so the marriage dies.

I’ve heard that now a marriage should be 100/100, meaning that each person gives all they can of what they have and who they are to make the other person happy. And their mate gives 100% as well, so both people are satisfied. No one keeps score, no one is disappointed, and they continually work at it.

Sounds like a plan. And it could work in other relationships as well.

Hmmm. Selflessness instead of selfishness. What a concept!