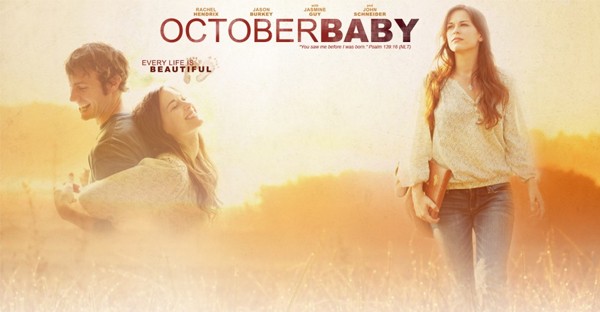 I’d like to welcome my friend, movie producer Cecil Stokes to Inspire a Fire today. Cecil is one of three producers who worked on the film October Baby, which releases on DVD and Blu-ray TODAY, September 11th.

What was the initial inspiration for October Baby? Who had that initial inspiration?
This is a classic story. One of the directors and I were brainstorming ideas one day and he said, “I’ve always wanted to do a movie called October Baby.” I said, “Great, what is it about?” He replied, “I don’t know, I just have the title.” We both laughed and I pulled out my laptop. I said, “If a baby is actually called October Baby, she must have never been given a name, so she would have been orphaned or abandoned or something like that.” I typed “baby with no name” into the search engine and “Abortion Survivor” popped up. We were stunned; we didn’t even know those two words ever went together. And there, the movie October Baby was born.

How did October Baby‘s script come into being?
Since the directors and I are all men, we wanted to write this script with a woman. Theresa Preston was our first choice. We interviewed many women who had survived failed abortions, as well as women who had abortions. Then, we took all of those stories and the script came to life.

Tell us a little about the casting of October Baby.
The cast of October Baby is the other reason the movie exists. The day we brainstormed the movie idea, we had just wrapped shooting a pilot. There were a handful of phenomenal actors on that pilot that we said we must work with again. From day one, we wrote roles for Rachel Hendrix, Jason Burkey, Colleen Trusler, Austin Johnson, Brian Gall, and Alexander Nifong. I would happily work with these people for the rest of my life. What a blessing.

How did October Baby fare when it came out in the theaters?
I laugh a little when I hear this question. We opened the same night as The Hunger Games. It was a brilliant choice by our distributors because it allowed us to crack the Top Ten movies nationwide. So many people went to see The Hunger Games that October Baby was able to rank so high. Plus, ticket sales were around 1.7 million for opening weekend. That is very good for an independent, faith-based movie. Being included in the Top Ten made the media stop and take notice of our film and whether the reviews were good or bad, it was publicity we could have never afforded.

Are there testimonies of how this movie has touched others’ lives?
I could never begin to tell you all of the stories we received after October Baby opened. Emails, blogs, telephone calls – hundreds upon hundreds immediately. I was personally very fortunate to hear many of these stories first-hand in the theaters.

Can you share a few of those testimonies with us?
The night the movie opened in Charlotte, my entire Sunday School class went to see the film with me. After the credits, many of them were congratulating me, and a group of three women sitting behind me asked what my association with the film was. I told them and one lady shared her story. She said when she was in college, she and two of her friends got pregnant and went to an abortion clinic. The other two had abortions but she made the very difficult decision to keep her child. The woman asked if I would be at the theater the next day because she would bring her now teen daughter to see the film and I could meet her. That was so amazing for me. I was so touched that I was able to meet her daughter the very next day. We’re now all friends on Facebook!

What is the most significant thing that you have experienced in the process of making this film?
It’s hard to chose just one, but there is a moment I will never forget. I went to bed the night like a kid on Christmas Eve before the movie opened. I knew I would be waking up the next day with our first movie opening, and I knew that would feel incredible. But something happened that surprised me. I guess I expected to feel a lot of pride (mostly the good kind), but that is not what happened. My eyes opened that morning and my first thought was how honored I felt to have been used by God to share His story of forgiveness and healing with the world. I literally rolled out of bed directly onto my knees; my feet never touched the floor. I then lay face down on the carpet and began to sob. God told me that in my wildest imagination I could not understand all the people He had planned on touching with October Baby. I thought of my first day in heaven and how I would meet so many people who I never met on earth who were touched because of our film. I have never felt more humbled in my life.

What can our readers do to further promote October Baby?
This movie was as successful as it was solely because of one person telling another person. It was a beautiful grass roots movement that helped us do so well. The same thing is true for the DVD release. Word of mouth, gifts, blogging, reviews, Facebook updates – this is how everyone can help.

Thank you so much, Cecil, for your time and for allowing God to direct your work so He could impact so many here on earth with His message about the importance of life and the importance of every woman’s decision.