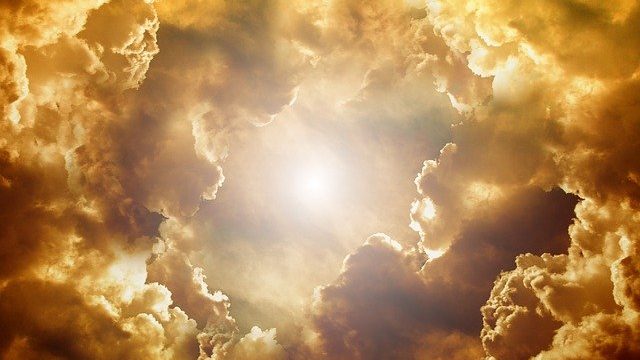 Clearly (pun intended), the coming of Christ will be a cataclysmic event witnessed throughout the world–not on screens, but in the heavens, the sky, right above our heads.

“He will send his angels. With a loud trumpet, call his angels will gather his elect from the four winds, from one end of the heavens to the other.” – Matthew 24:31

Now we come to a passage of conflicting actions. During the time of Noah the flood took those in the fields, grinding at work, eating and drinking. But when Christ comes, he will send his angels to gather his “eklektos” “picked out,” “chosen” people. Perhaps what Jesus is suggesting in this passage is that his angels will gather those in Christ in the same way Noah gathered his family and pairs of animals into the ark, in order that they might be saved from destruction. This has led many to link these verses with 1 Thessalonians 4:16-18 and conclude those in Christ will be transported into heaven before great destruction comes on the earth.

For the Lord himself will come down from heaven, with a loud command, with the voice of the archangel and with the trumpet call of God. The dead in Christ will rise first. After that, we who are still alive and are left will be caught up together with them in the clouds to meet the Lord in the air. 1 Thessalonians 4:16-18

In one sense the catching, rising, gathering mirrors what Noah and his family experienced. While flood waters covered the earth, those in the ark were lifted towards the heavens. They rode above the destruction below. “My words will never pass away.” – Matthew 24:35

All things were made through Him, and without Him nothing was made that was made. – John 1:3

The law was given through angels but you have not obeyed it. – Acts 7:53

Since the message spoken through angels was binding, and every violation and disobedience received its just punishment, how shall we escape if we ignore so great a salvation? – Hebrews 2:1-3

Then the Lord said to Moses, “Write down these words, for in accordance with these words I have made a covenant with you and with Israel. And Moses wrote on the tablets the words of the covenant — the Ten Commandments. Exodus 34:27-28

When we preach the Cross, the energy of God is released. – Oswald Chambers