I felt the weight of her small form press against me as I lay in bed early one morning. “Mommy, I’m scared,” she said, digging under the blankets and pulling my arm around her slim waist.

“Because I’m different,” my three-year-old daughter replied. “Come see.” She pulled on my arm. I yawned and pushed back the covers.

She led me across the hall to the bathroom, and stretching her arms high, she waited for me to lift her. Together, we turned and looked at the mirror. I had known this day would come.

“See.” She pointed towards the mirror and the swelled hump of deep purple flesh connected between her nose and upper lip, the size of an adult thumbprint. However, unlike a thumbprint, this mark rose and puffed up like an overripe strawberry.

I pulled her hand down, hugged her, and turned away. “No! No!” she screamed. “Look!”

I paused and looked back at her in the mirror. “I know,” I said. “I’ve known since before you were born.”

“But do you see?” Her littl 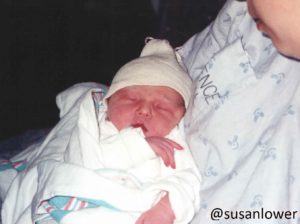 We’d watched Veggie Tales the night before and all I could think of to respond was to say, “God made you special and He loves you very much.” And I added, “So do I. I love you just the way He made you.”

All the while I spoke, my heart ached.

“We’re all different,” I tried to explain, but she insisted on being held in front of that mirror. She had to compare our faces, to convince me she was unique. But I already knew.

I remembered an incident when I was six months pregnant. While waiting in line at the grocery store, a small child ducked her head around a man standing ahead of me. The little girl’s father, a morbidly obese man, gripped his stacked cart next in line at the checkout.

But it wasn’t the girl’s father who drew my attention and caused me to gasp. It was the child’s face. Large red welts, like small volcanic eruptions of angry red flesh, bubbled from her hairline and raked down her forehead to her plump little cheeks.

I tried not to stare.

For a moment, I wondered what it would be like to have a child who was different from the rest. I couldn’t imagine having a child such as that. Yet, as that image crossed my mind and my eyes fell to the little girl’s chubby face, I felt as if I’d just volunteered.

It struck my heart like lightning splitting a tree.

I rubbed my hand over the swell of my belly. I knew then that my child would have a similar disfiguration to that child’s.

An unsettled feeling — a mother’s intuition—washed over me.

The little girl giggled and danced around her father’s legs.

I tried to dismiss the thought from my mind. How could I possibly think such a thing about my own unborn child? I watched the father lift that little girl into his cart and walk away.

I tried to shake the feeling as I stepped up next in line. But deep inside, I knew.

Finally, I held my daughter in my arms for the first time. Then I saw it. My baby girl had a tiny red-blistered dot at the peak of her cupid’s bow on her upper lip. In the far corner of my hospital room, my nurses stood whispering. I heard the words “cleft lip” and “the doctor will be in shortly.”

My husband and I cuddled close, with my daughter resting in my arms, as the doctor explained. They called it a Hemangioma.

By the time she was three months old, that little red blister had spread and grown obstructing the right side of her nose. Almost weekly, we went to visit the doctor.

I was thankful for the winter months soon after her birth that I could cover her with a blanket and avoid the questions and stares I so often encountered.

I was angry, for a long time after her birth. How could God have done this to my child? He created my daughter. He designed her for His purpose. He gave her blue eyes and long brown hair. Yet, he also gave her that mark.

I think back, often, to that little girl in the grocery store. It was that memory of how her father kept her at his side that allowed me gaze upon my daughter with a new perspective.

That father didn’t hide his child away from others to see.

Nor was I protecting mine by keeping her from the world.

“He has made everything beautiful in its time.” I clung to that verse from Ecclesiastes.

I took off the blanket, looked past the stares, and ignored the comments.

Now, I gazed upon this beautiful little girl that God has given me.

From that morning on, we began each day by gazing in the mirror. We’d take turns pointing out all the ways we were different, like a freckle, a birthmark, or the shapes of our nose.

And then one day, we just stopped looking in the mirror.