“Mom, is Santa real?” my curious six-year-old asked as I tucked him in and kissed his cheek.

‘Here we go,’ I thought. I took a deep breath and went the history route as I did with his older brothers. Speaking truth, but leaving a little to the imagination. 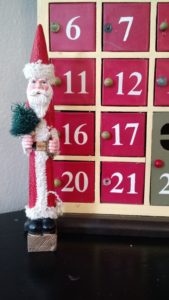 “Well Lewis, there was a guy who lived a long time ago. He was called Saint Nicholas, and he was a very kind man who gave gifts to the poor and who loved children very much. His kindness is how the story of Santa Claus began.”

“Oh. I didn’t think he was real. Tomorrow I’m going to tell Michael that Santa is really Saint Nicholas, but now Santa is dead.”

Not exactly the response I was anticipating.

It is entirely possible he went to school the next day and attempted to dash the hopes and dreams of his classmates. But I’m pretty sure most children would choose to believe their parents over their classmate with a mohawk, so I didn’t feel too bad.

I take no issue with families who play the Santa game. Who create elaborate schemes to keep their kids believing in the jolly fat guy for years. I can see the fun in it. I just couldn’t do it. When my son asked me point blank, I could not look him in the eye and tell him this guy actually exists.

Maybe it’s because I’m so terrible at bluffing. (Seriously, I have a hard time watching those hidden camera practical joke shows because I always feel so bad for the people being tricked.)

Maybe it’s because I knew one day Lewis would know the truth and he would wonder how many other things his mom lied to him about.

Maybe it’s because I’m selfish and want to sign my own name in the from spot on the gift tag. I don’t want to give some imaginary guy credit for those gifts I bought.

But mostly I want him to know that this holiday is not about a jolly fat elf. It’s about a Savior who came as a baby. Do I think parents can successfully teach kids the true meaning of Christmas and still let them believe in Santa? Of course I do. I have friends who did it beautifully. But I couldn’t get the thought of Jesus and Santa playing tug-of-war in Lewis’s mind out of my head.

People may ba-humbug me. Or call me a party-pooper.  Or even think I’m ruining my son’s childhood. That’s okay. I realize I am in the minority here.

But each year as the day of Christ’s birth comes closer, I am convinced I made the right choice. The season is still filled with wonder. What’s more fascinating than a stable-born baby who came to save the world?

It makes me smile to look at our nativity set on display. My Santa disbeliever Lewis always has full charge of that manger scene, complete with a broken sheep and a wise man with a cracked head.  And he usually chooses to put Jesus in the center and position every other piece in a half-circle facing the baby. It’s not the most aesthetically pleasing way to arrange the display, but it is just as it should be.

Santa may be dead, but our perfect Savior is alive and well.

Though my Lewis has never spent his Christmas Eve dreaming about the mythical guy who slips down the chimney and leaves shiny toys, he just might fall asleep with visions of a tiny baby in a stable and angels singing to shepherds on a hillside. (Oh and somewhere in that dream sequence I’m sure he also finds himself drooling over those brightly wrapped gifts mom and dad put under the tree.)

For to us a child is born,
to us a son is given,
and the government will be on his shoulders.
And he will be called
Wonderful Counselor, Mighty God,
Everlasting Father, Prince of Peace. – Isaiah 9:6

How do you handle the Santa dilemma in your house? Are you able to pull it off brilliantly and still keep Jesus at the center?